The New York City Employees’ Retirement System (NYCERS) was founded by the New York State Legislature in 1920 with 13,331 members. Today, NYCERS has grown into the largest municipal public employee retirement system in the United States with more than 350,000 active members and retirees including civilian employees such as clerical workers, accountants and social workers, and uniformed employees such as New York City Correction Officers and Sanitation Workers.

NYCERS is a defined benefit retirement plan, meaning a member’s benefit is defined by law, not by the condition of the stock market on a given day. NYCERS membership is available to civilian and uniformed employees of the various agencies, boards, and commissions of the City of New York, as well as employees of public benefit corporations such as the NYC Transit Authority and NYC Health + Hospitals. Retirement benefits provided by NYCERS, based on a member’s years of service, age, and compensation base, are funded by employee and employer contributions and from earnings on the invested assets of the system. Other benefits of membership include the ability to borrow against your pension contributions, portability between NYS and NYC public pension systems, and disability and death benefits.

NYCERS is dedicated to a client-centered approach to quality service delivery and performs many functions for active members and retirees. On the occasion of NYCERS’ October 1, 2020 100th anniversary and beyond, its focus is on strengthening core business capacities through several major technology modernization projects. Those projects include a Customer Relationship Management system (CRM), state-of-the-art Call Center technology, greatly expanded online services, and a replacement of the legacy pension administration system. The first phase of our journey to transform the members’ experience was the launch of our CRM system in August 2019, enhanced in 2020 with more than a dozen new online features, including NYCERS’ first mobile app. 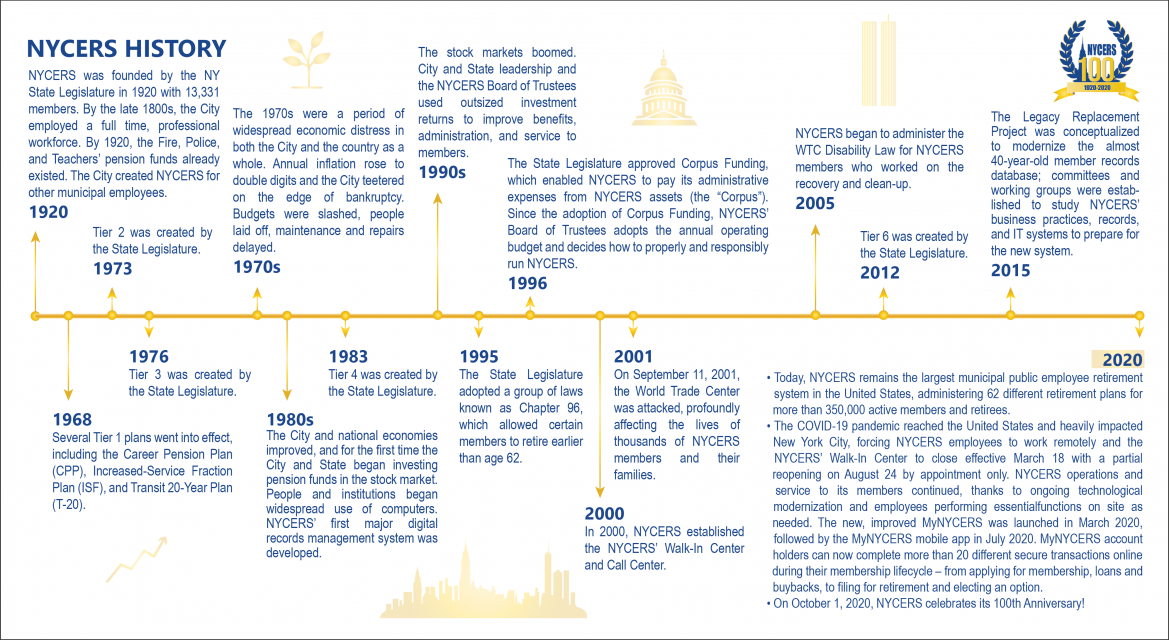 This item appears in